Creative Dressing & The Art of Fashion

…. what I’m saying is someone who has an avid passion for fashion, isn’t always the person who wears the ‘Big Name’ labels, in the latest season’s trends, as soon as they arrive on the high street!

We all have a choice in the way we dress; (in leisure time I’m referring to, not necessarily in the workplace) the way we dress normally reflects our lifestyle, how we feel, or how we like to be perceived! Now, this is where it gets complicated!!!

The dilemma of what to wear: Throughout our lives, most of us at some time or another have gotten ourselves into a state of consternation over dress! Some people can become more overwhelmed than others; this normally is attributed to ‘confidence’ – or lack of the aforesaid!

It’s quite normal to be concerned about wearing the correct attire when attending a formal or important occasion. In times past, we had strict etiquette and guidelines to adhere to; making the dilemma less of a headache, although I’m sure these rules brought many other problems. Nowadays we do not (generally) have many hard set rules, leaving us to make our own decisions! Thankfully ‘formal or important occasions’ are not very regular occurrences for the majority of us … but that doesn’t stop many of us from getting quite uneasy about dressing!

With the global increase in consumption of goods, dress has become such an integral

part of life, for centuries we dressed according to our culture, climate, status, and age …Not anymore! With a ‘Credit card economy’ and ‘On-line consumerism’ many of us, almost anywhere in the world, can purchase anything we so want! Which takes me back to the “dilemma” of what to wear? Too much choice can sometimes be much more daunting than too little choice! 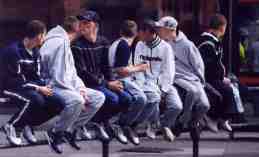 Many of us dress for acceptance, we dress to be part of a particular ‘set’ or we want to appear to be part of that ‘set’ … we want to ‘fit in’ … we don’t want to be conspicuous (not for the wrong reasons, anyway!)

OR … on the other hand, we want to elevate ourselves …we want to impress … we want to stand out! We want to appear more affluent, and don’t we all want to look more attractive? Many of us think that by wearing the latest designs, especially by certain designers and labels, we will reach all of our aspirations and acquire that privileged lifestyle!!! Or at least people will believe we have … won’t they?

SO! … If you don’t know what to buy – what do you do? Well without  us even realizing it we are following ‘trend’  We are cleverly manipulated by the media, the advertisers, the marketeers, & the celebrities who all get paid by the global apparel brands

THEN … there are those of us who please ourselves, those who are the Creatives, the Individualists, those who break the rules, those who enthuse over fashion as an art form, as a sign of self-expression …  which brings me to the point of

‘Creative Dressing & the Art of Dress’

You will all have seen press reviews of a runway show where the designer unveils the most outrageous creation for the finale or the whole show is a concoction of bizarre or sometimes shocking formations. The debate begins: “Who on earth would wear something like that?” we ask. “How ridiculous!” we scorn!   “That’s not fashion!” we declare! “What is THAT?” we question.  It’s ART!!!!

And so the controversy continues “Can fashion be described as ART?”

On this point, I would like to mention Alexander McQueen one of the most controversial British couturiers of our time, a master tailor? Or, was he a talented artist? Unfortunately, this brilliant young man, like many Creatives, suffered depression and he was dogged with mental illness causing him to take his own life in 2010 at the age of forty and at the pinnacle of his career.

The world of fashion paid tribute to this genius in the form of “The Savage Beauty Exhibition” first held in 2012 at the Metropolitan Museum, New York, Then in 2015, this spectacular exhibition was housed in the Victoria & Albert Museum London, selling more than 480,000 tickets and prompting the museum to stay open 24 hours a day during the last weekends of the exhibition to meet demand. This was the first time the museum had ever extended its hours this way to accommodate interest in an exhibition. 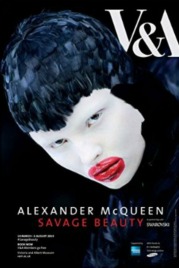 Another great fashion designer, who would most certainly be described as a true artist is Elsa Schiaparelli.  Regarded as one of the most prominent figures in fashion between the two World Wars, her designs were heavily influenced by Surrealists, like her collaborators, Jean Cocteau and Salvador Dalí whom she hired to design fabric for her fashion house. In 1932, Janet Flanner of The New Yorker wrote: “A frock from Schiaparelli ranks like a modern canvas.” Some of Schiaparelli’s famous and somewhat amusing designs include her “Shoe-Hat” her “Skeletion Dress” and “Lobster skirt” These Avante Guard creations caused quite a stir but did not detract from her dazzling intricate beaded eveningwear and experimental jewellery in modern synthetic materials. 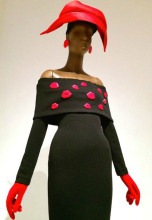 We are now seeing more & more people expressing themselves in the way they dress and I must say this trend is rearing its head in the older generations, ‘the baby boomers’ of the fifties now reaching retirement, no longer restrained by the shackles of their 9 to 5 desk job. Confident! & Brave! This new “Street Style” evolves from the ‘Rebels’ and Punks’ of the 60’s & 70’s. NEVER BEFORE HAVE WE HAD MORE CHOICE IN THE WAY WE DRESS!!! 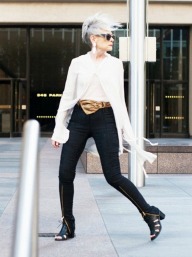 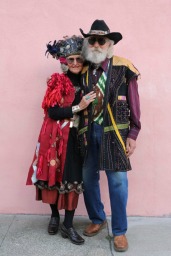 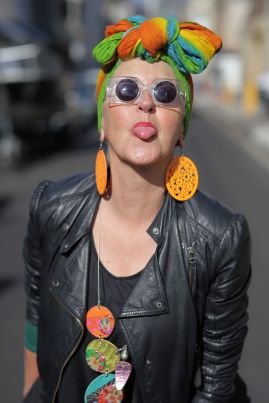 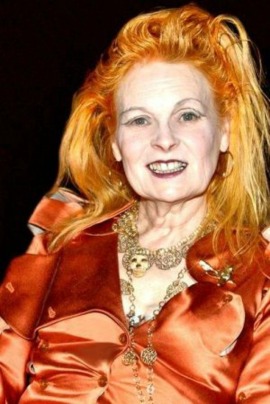